Spring Breakers have left the beach and the recent rains have leveled the driving surface making a smooth path for some bean and shell hunters. 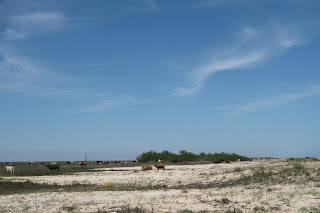 After some quick and unsuccessful searching along the lower strand, I headed up to my usual spot behind the dunes. The sand has been blowing and the cattle have tromped through the wrack line but I managed to find a few keepers. 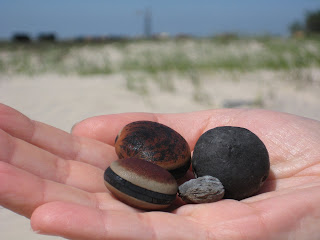 Two red hamburgers, one prickly palm, and a tiny water hickory were a fitting reward for a short search. As I was coming back to meet Tracy, I noticed some beans in the upper strand. 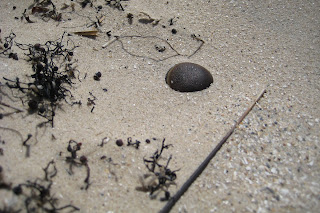 Here is a freshly stranded hamburger as seen from above. 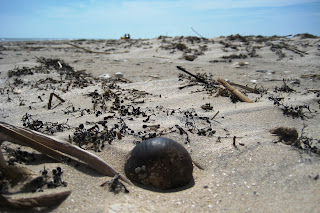 This is a sea coconut in the upper strand. You can see the Jeep in the background and the surf to the left. This strand line is about 100 yards from the water and represents the latest high water mark. You can see some of the seaweed that came in with the high tide. 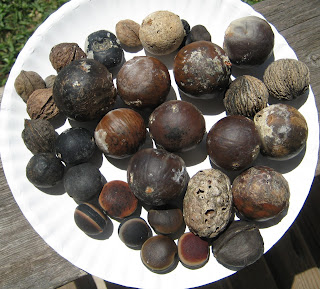 Here is the total take - quite a mixture of sea beans! 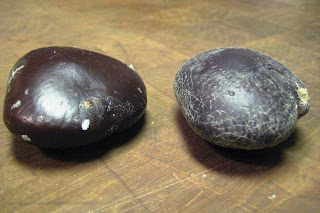 Tracy found these two sea hearts but she was looking hard for a hamburger! 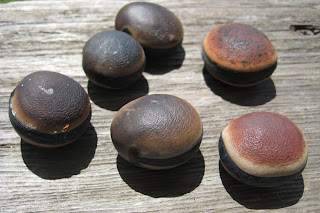 The burgers: two reds from the dunes and four brown ones from the upper strand. 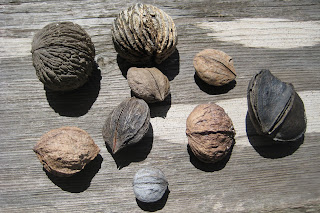 These are the locals - two black walnuts and several hickorys - even one with the husk intact. 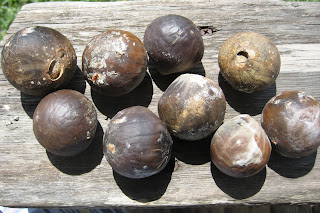 We saw several sea coconuts besides these that were fresh but cracked. Most of these will polish up and retain their shape with out cracking out. 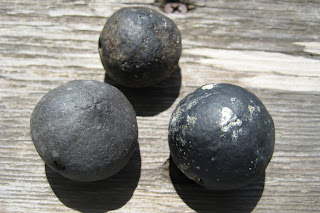 Three prickly palm the largest of which is the best one ever. 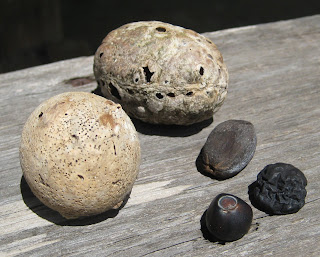 This variety includes a laurelwood, a blister pod and some small seeds. 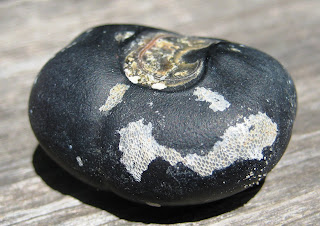 This is the real find - a Mary's bean (Merremia discoidesperma).

Named after the Virgin Mary, it is also called the crucifixion bean because of a cross etched on one side of the seed. This is a first for me and one I have been looking for. In addition to being one of the most unique and unmistakable drift seeds, it also has the greatest documented drift range of any species on earth.(15,000 miles) 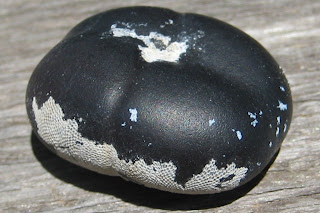 The white scale looks like an egg case. It comes from a little-known beach vine in the morning-glory family growing in a small area of Central America, parts of Mexico, Guatemala, Costa Rica, and Hispanola. 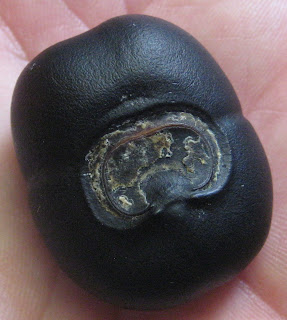 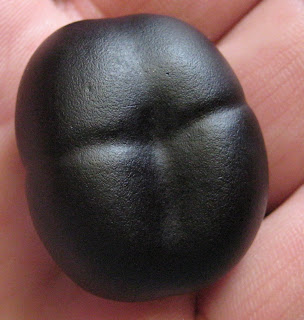 The seed has some vine-like wrappings that cause a cross shaped indentation to form as the seed develops. There is much folklore surrounding this bean.

looks like quite a haul! and to think all those spring breakers just walked past those beans!

I am a french botanist about to publish a book concerning decorative use of fruits and seeds. I am still missing some pictures for several species. I found this picture on your website :
http://1.bp.blogspot.com/_uuHPvedMUw4/SdkQqWFQYzI/AAAAAAAAB-M/MSQm2KSl8e4/s320/IMG_1039.jpg

I would like to know if you alloz me to use the picture of Merremia to illustrate the family Convolvulaceae. Of course i would mention you and the website in the book.

For those who are interested, the book about decorative seeds of the world will come out next month on "Sang de la terre" editions. I have a small website here : www.terredegraines.fr
Thanks !

Hello I want to congratulate to them by its site of the Web of the excellent looks like entertained and very good very to me it elaborated. I invite them to that they explore a little on my Web site. Lots in Costa Rica lots in costa rica

Thank you for sharing information. It is quite useful for us also. I always love to read such type of things. lots in costa rica