The weather this weekend was tricky to say the least. Friday was predicted to be unsettled and Saturday was supposed to be stormy. Both came true but the effects were not as bad in Matagorda as further inland.

Our beach adventure took place on Saturday morning and there didn't seem to be many folks on the beach when we arrived. The surf was up and we could see some fresh wrack as we headed in from the access road. We only went about 1/2 a mile and decided to get out and walk instead of driving too far down. 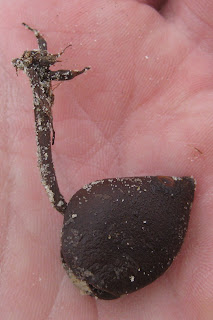 The black mangrove seeds have turned from the usual green to a glossy brown and keep your eyes guessing as they look promising when you first see them. These seeds sprout but don't grow this far north along the coast. Just a little to the south there are some nice mangrove flats that I'm itching to explore. 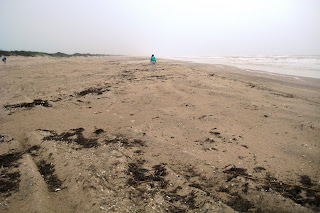 This shot shows the wrack line. The seaweed is the marker but there is plenty of flotsam mixed in as well. This part of the beach has been worked over with a motor grader during Spring Break & Easter but there has been enough of a tide earlier in the week to bring in some new treasures. 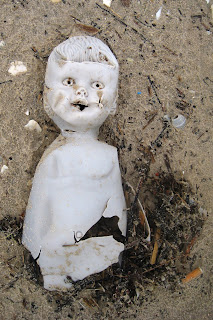 This young beachcomber stayed out in the sun a little too long. It may be time to take a break!

We found several beans but both of us had a similar experience of walking by a good bean and having the other pick it up later. Tracy picked up a nice starnut palm right near where I thought had searched with a fine toothed comb. 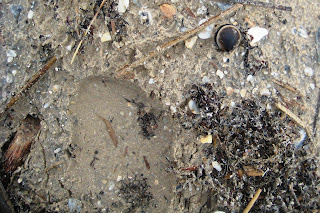 The shot above shows how close you can come and still miss seeing a good bean. I call this the "Bypassed Beach Burger". That's Tracy's footprint next to the bean.

I figure between the two of us we found most of what was there. 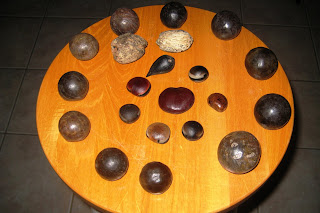 Here is the take for about 2 hours of searching. The outside ring is made up of sea coconuts after I hit them with the dremel and some sandpaper. There are three palms - the pointy one is a starnut and the other two above it are cohune palms. Tracy found a seaheart (in the middle) and surrounding it are several hamburger beans and one sea purse. 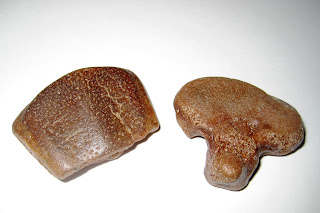 I also found another piece of what I think is a fossilized bone (left). It is identical to the one I found earlier except the shape is different. Both are porous and have bone-like characteristics. I'm going to keep looking and maybe one day I'll have enough collected to figure out what they came from.
Posted by John Batchelder at 2:37 PM