Since we now have the travel trailer parked at Pelican Point and the beach is just a few miles away, we'll have more opportunities for beaning. 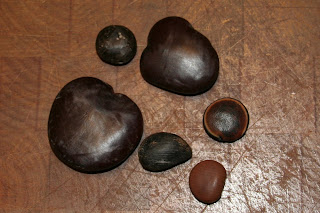 Two sea hearts (I found a third one in the dunes but it was cracked and falling apart), one starnut palm, one brown nickarnut, one hamburger bean, and a prickly palm.

I'm using the Dremel tool to clean off the crusted salt and to start the polishing process.

My collection is getting bigger!
Posted by John Batchelder at 11:06 AM 1 comment:

OK I admit it - sea beaning isn't for everyone. I was reminded recently that the blank stares and unusual looks I get when telling all I know about this facinating subject to others should be expected. After all, not everybody gets it!

But you must get it since you have found your way to this blog. So for your enjoyment I tried to capture the thrill of the chase...the exciting and rarely experienced "Search for the Sea Bean". 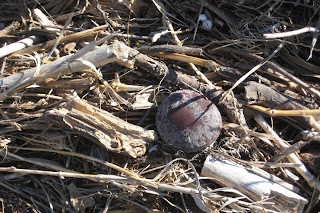 Here is a great find - a sea heart.
Beaners have been known to shout aloud at this sight. 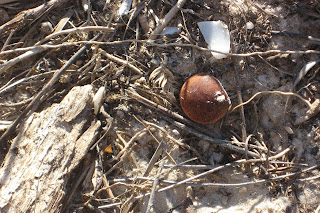 My first sea purse.
Oh the stories you could tell my little one... 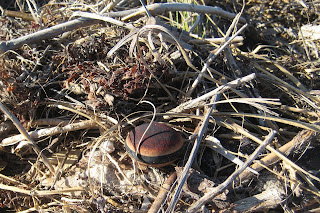 Another gem - a red hamburger bean.
My eyes are trained to spot these amid the debris. 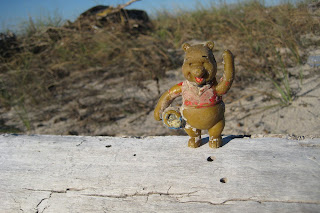 It's always nice to see a fellow seeker in the dunes.
"Have you seen any bees?" 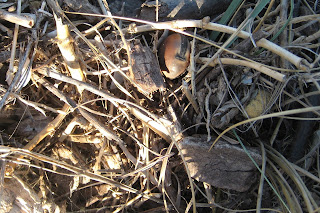 This brown burger was a little tricky to spot as it was sitting on edge. 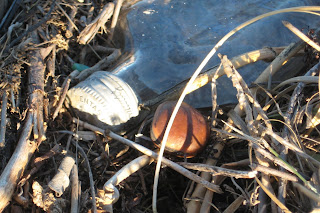 The next saddle bean was found close to this "medicine" bottle. 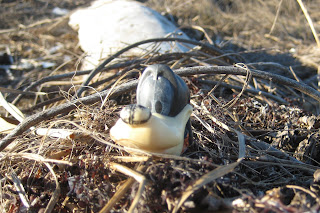 I'm told you have to be a little "Goofy" to spend time searching
through washed up garbage and debris for seeds. 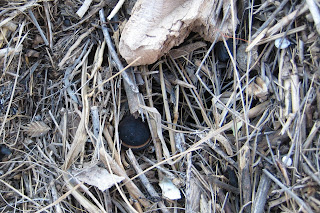 This is a rare black hamburger bean from deep in the tropics. 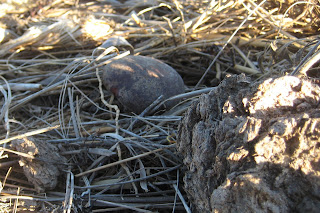 Another sea heart. Watch out for the meadow muffins!
Those silly cows.... 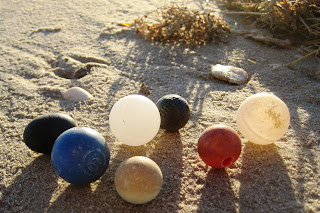 My eye is drawn to other forms of semetry while looking for beans. Here is a sample of other collectibles found while searching the wrack.

Found and gathered but left behind, these are some of the more common drift seeds I have come across on this particular beach. 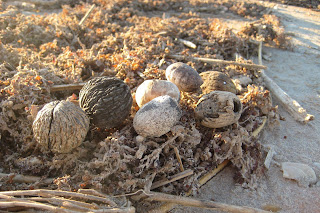 Water hickory, black walnut, pecans, and even a couple starnut palms that had become punky from too long in the salt water made the list of leave-behind seeds this day. 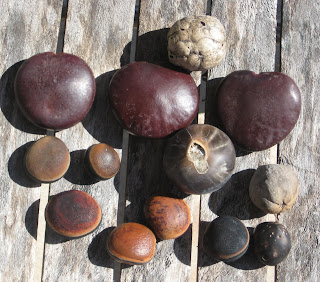 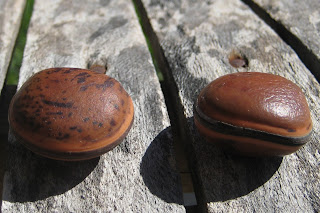 These were my first two sea purses. They are very similar to hamburgers but have a thinner middle layer and are flattened and have a wider hinge. 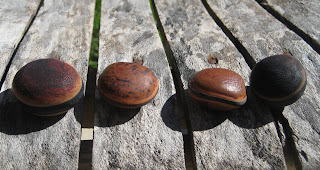 Here they are shown with a red and a black hamburger on either side. 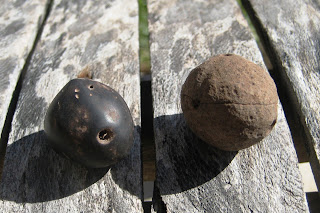 This is a before and after shot of a prickly palm. They don't look like much when found (right) but after some sanding and polishing they develop a nice lustre.

I hope you had fun searching for sea beans. Come by again!
Posted by John Batchelder at 9:19 PM 1 comment:

How do you spend your birthdays?

As I get older I find that time spent with my wife doing quiet activities like beachcombing are just what the doctor ordered. I'm not sure if it is the escape from the stress or the enjoyment of being outside that is so appealing.

Tracy and I used to go to antique (junk) stores in search of treasures. Now we roam the beach looking for free junk. 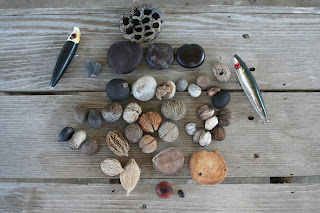 Here is the collection from today's search: We found several walnuts, pecans, and almonds along with a few starnut palms some prickly palm and a blister pod. There were some new finds this trip along with some topwater lures that were still in good shape. 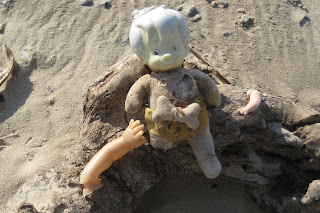 In amongst the beach debris, I always see parts of toys. This collection was from the spare parts department. 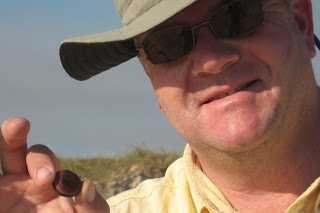 I searched for hours in the dunes without finding a single hamburger bean but found one near the beach in the line of recent flotsam. There must still be some floaters out there! 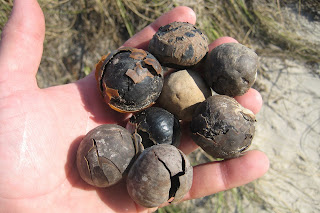 I continue picking up sea coconuts like these even though they are only good if the shell is intact. These were left behind after the photo shoot. 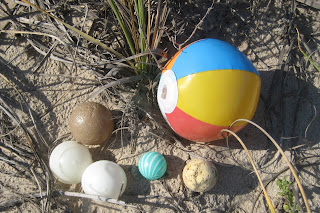 Here is a collection of balls including a mini beach ball. Someone may find the display and wonder... 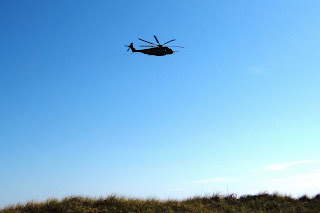 I may have been reported to the government as this military gunship buzzed me. 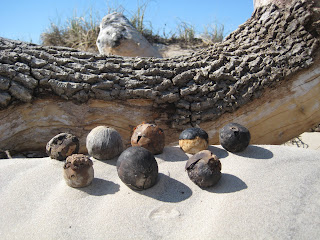 Here are some more sea coconuts I found on excursion #2. Some of these will make it home with me for polishing. 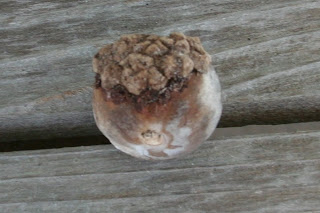 This sea coconut still had some of the husk attached - a fairly uncommon find. 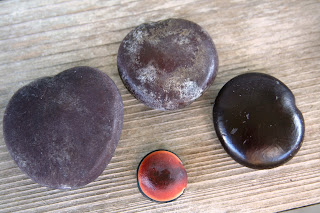 These were the prize finds of the day - three sea hearts and one red hamburger. Notice how fresh and shiny the sea heart on the right is compared to the other two. 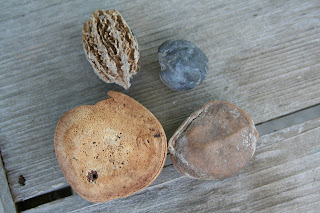 I had some new finds today - the two in the front are seeds from the antidote vine, the two in the back are a butternut (top left) and a candlenut aka Jamaican walnut. The candlenut gets its name from the oil that is produced from it's seed that is used for oil lamps in some countries. The seed contains 50% oil and it was also removed and skewered to a thin piece of bamboo and lit where it would burn for 45 minutes. 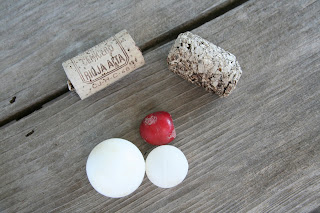 Here are some other interesting objects - two wine bottle corks (one new and one old), two Teflon balls (bearings?) ,and one red fake fruit possibly a cherry.

You never know what you might find along the beach or from where it may originate.

Posted by John Batchelder at 11:55 PM No comments: