After Ike, the beachcombing was sure to improve. Tracy and I visited the beach not long after the storm and she found some cool shells.

The lighter drift seeds and Beach Beans were pushed way up into the dunes. 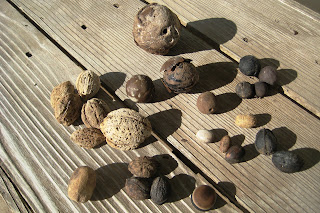 This picture shows the collection found on this excursion. There are some of the usual characters like Tropical Almonds, Water Hickory, Pecans, and Sea Coconuts. I found some new specimens though including a Gray Nickarnut, a Brown Hamburger Bean, and what I think is a a Jamaican Navel Spurge. 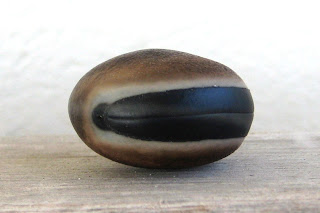 This is a close up of the brown Hamburger Bean (Mucuna rostrata). This is a seed of a tropical vine from which is also called Ojo de Venado (eye of the deer (or Doe's Eye)), Ojo de Vaca (Cow's Eye) and Ojo de Buey (Bull's Eye).

The vines that produce these seeds grow in Costa Rica, Hawaii, the Amazon, and other exotic locations where they find passage via local rivers to the ocean and then to the Southeastern US by way of the Gulf of Mexico.

I also picked up some coconuts which are also considered drift seeds. The one on the right is a mature seed complete with the natural fibrous husk intact. The one in the middle shows the hard seed with half of the husk removed and the one on the left is a seed only. This one had some holes drilled in it (see on the top and lefthand side). Some of the drills were started and a couple were all the way through the shell. I have to wonder if the coconut drill is some sea creature like the raspy tongued Murex or the Moon Snail both of which drill holes in mollusks and eats them. 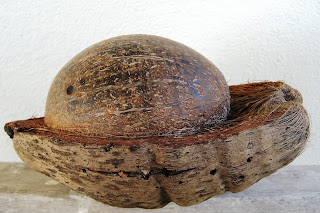 Here is a side view of the cut-away coconut. Macaroon on the halfshell anyone?
Posted by John Batchelder at 5:31 PM

I say old bean, those things have away of making me hungry too.